The SC makes these decisions considering the funded status determined in the annual valuation which is an indicator of the plan’s current financial health. Their decisions differ depending on the funded status.  The chart below, while not prescriptive, summarizes the types of action the SC would consider when reviewing the benefit and contribution levels of the Plan. 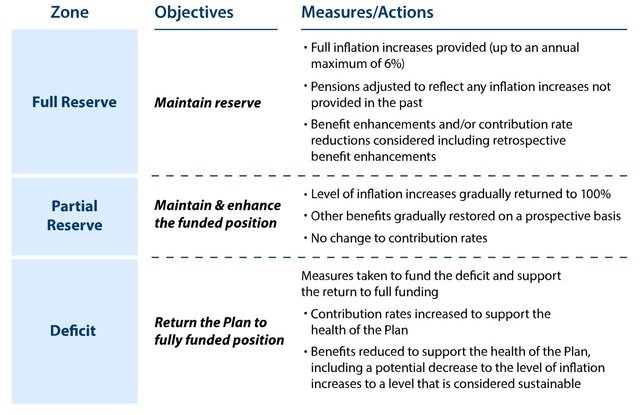 Inflation increases can continue while the Plan is in deficit if the minimum funding requirement is not greater than the current contribution rate.

OMERS keeps a close eye on the plan to see if plan changes are either required or desirable due to things like changes in the pension environment or a desire to evolve the plan. Such changes are considered on an annual cycle unless, for unforeseen reasons, decisions must be made sooner. In that case the SC will generally, at a minimum, communicate through its website at least 21 days before decision.

The SC continues to welcome ideas and input from stakeholders on ways to make our pension plan better. Click here for more information, or simply call us at 416-814-6584.